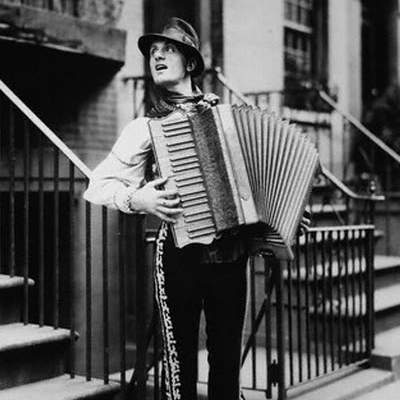 During radio’s golden age, Arthur Tracy was among the medium’s brightest stars; celebrated as the “Street Singer,” his rich, romantic tenor established him as one of the Depression era’s most popular vocalists. Widely assumed to be an American because of his clear diction and troubadour style, Tracy was in fact born Abba Tracovutsky in Kamenetz-Podolsk, Moldavia in 1899, emigrating with his family to the U.S. in 1906. The family settled in Philadelphia, and while Tracy originally studied architecture at the University of Pennsylvania, he later dropped out to pursue a musical career, After winning a scholarship to the Curtis Institute of Music, Arthur (a Central High graduate) was tutored by Horatio Connell, who groomed him for contests sponsored by the famed Philadelphia Music Club. He went on to win both the Philadelphia and Pennsylvania prizes, and became the Club’s only “honorary” male member.

Tracy relocated to New York City in 1924. After making his presence known on the vaudeville circuit, he joined the touring company of Blossom Time, and also performed in various amateur revues at New York; it was there that William Paley heard him sing, and offered him a 15-minute CBS radio program.

For fear of causing his family embarrassment if his radio career bombed, Tracy initially planned to bill himself as the Vagabond Singer before realizing that Rudy Vallee was already dubbed the Vagabond Lover. Upon reading about a Frederick Lonsdale play named The Street Singer, he decided to adopt the title as an alter ego; his 1931 broadcast debut proved immensely popular with audiences, and the true identity of the “Street Singer” became a matter of national speculation. Only after five months was Tracy’s true identity revealed, and within the year he was in Hollywood to appear in the motion picture The Big Broadcast of 1932 with Bing Crosby, Kate Smith, the Boswell Sisters and other radio stars. He also continued his radio series, which was so successful that it often aired several times a week; even at the peak of the Depression, when record sales were at their lowest ebb, Tracy’s recordings flew off the shelves, and he scored hits with “Here Lies Love,” “When I Grow Too Old to Dream,” “I’ll See You Again,” “Red Sails in the Sunset” and his theme song, “Marta, Rambling Rose of the Wildwood.”

In addition to a varied repertoire which encompassed love songs, ballads and hit pop tunes, Tracy also sang in several languages, including Spanish, Italian and German; he eventually became an international star, and in 1935 mounted a highly successful tour of English music halls. Tracy remained in Britain for many months, appearing in several films including Limelight, Command Performance and The Street Singer; after the outbreak of World War II he returned stateside, later touring overseas to entertain American troops. In the years that followed Tracy scaled down his performing career as he became a multi-millionaire on the strength of a number of real estate investments; he enjoyed a comeback of sorts in the early ’80s when his recording of “Pennies from Heaven” was used in the Steve Martin film of the same name, resulting in a cabaret gig at the Cookery in Greenwich Village. He then acted in the touring company of Andrew Bergman’s Broadway play Social Security and appeared in the movie Crossing Delancey. In 1996, Tracy was awarded the Ellis Island Medal of Honor; he died in Manhattan on October 5, 1997. An autobiography, also titled The Street Singer, was published posthumously.