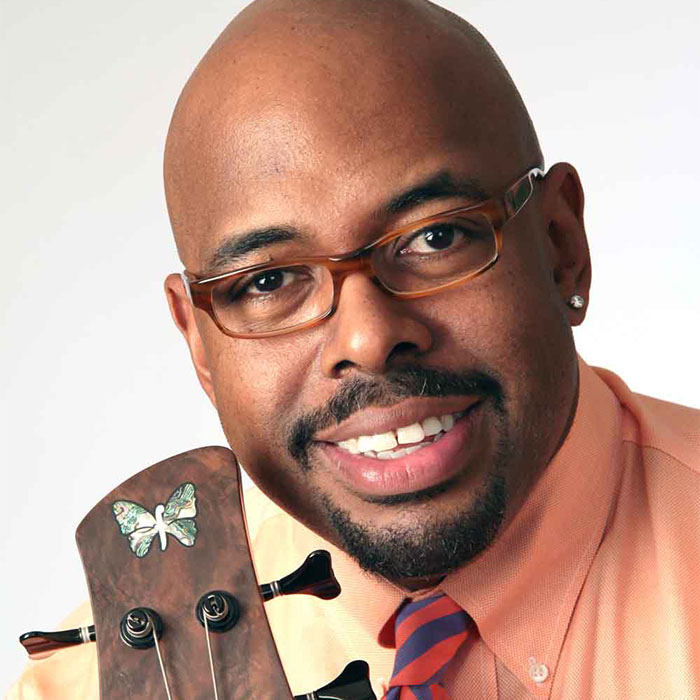 It’s not simply his abundant virtuosity that has made Christian McBride the most in-demand bassist of his generation. McBride consistently combines his deft musicianship with an innate ability to communicate his enthusiasm to an audience – a warm showmanship that transforms his own passion into infectious joy. It comes across whether he’s leading his own bands; sharing the stage with jazz legends like Sonny Rollins, Chick Corea, Herbie Hancock or Pat Metheny; accompanying pop giants like James Brown, Sting or The Roots; or collaborating with classical masters like Kathleen Battle, Edgar Meyer or the Shanghai Quartet.

Any time that McBride steps into the studio or onto a stage he plays what could be called “people music,” but it’s a particularly apt title for the second release by his hard-swinging acoustic quintet Inside Straight. Four years after Kind of Brown, the band’s acclaimed debut album, People Music delivers a more road-tested, “lived-in” Inside Straight, able to dig deep while projecting that ebullient vigor that has become McBride’s trademark.

“People Music is my personal mantra as a musician,” McBride says of the title. “Sometimes jazz musicians can get too caught up in their own heads; they get so serious and so caught up in their creativity that they’re not bringing the people in. So I figure the best way to communicate is to let the people navigate where you should go.”

For Inside Straight, that inclusiveness extends to the name of the band itself, famously the result of a contest that generated more than 3,000 submissions from fans. But more importantly, as is evident throughout the 8 original tunes on People Music, that means balancing intense interplay with an exuberant personal expression that speaks directly to the listener. “When you pull the people in, you can go anywhere as long as they feel like they’re a part of the ride,” McBride continues. That’s why Cannonball Adderley was always my hero – he always exemplified high artistry, but no matter how esoteric or abstract it could get, he still related to people. And I’ve always felt that this band plays ‘people music’.”

Make no mistake – there is a major difference between “people music” and “popular music” (though the two can overlap). McBride makes the distinction clear on the new album’s opening track, “Listen to the Heroes Cry.” The tune’s melody, evoking a modern spiritual, was inspired by the parade of vapid performances on a music awards show McBride watched one night, all garish spectacle and absolutely no substance. “It bothered me that the show was more about the image and less about the music,” he says. “It made me wonder what Duke Ellington or John Coltrane or Billie Holiday or Sarah Vaughan would think if they could see this. I think they would be crying.”

Those icons would be cheered by People Music, however, which features two slightly different incarnations of Inside Straight. Six of the album’s eight tracks feature the core lineup of McBride, saxophonist Steve Wilson, vibraphonist Warren Wolf, pianist Peter Martin and drummer Carl Allen. The other two tracks substitute pianist Christian Sands and drummer Ulysses Owens, Jr., who have performed extensively with the band when Martin’s touring schedule with Dianne Reeves or Allen’s duties as Artistic Director of Jazz Studies at Juilliard keep them away from the bandstand. Sands and Owens also comprise McBride’s new trio, which will make its recording debut later this year.

McBride contributes half of the repertoire for the album, but felt it was important to also feature pieces written by the other band members, all of whom are accomplished composers in their own rights. Wolf provides “Gang Gang,” the name that a dancer (like Wolf’s wife) would use in place of a musician’s “Afro-Cuban” or “12/8” to refer to the song’s surging rhythm. Sands brings the bright-hued “Dream Train,” while Martin offers the stealth funk of “Unusual Suspects” which recalls the groove of “Used ‘Ta Could” from Kind of Brown. Wilson’s entrancing ballad “Ms. Angelou” draws inspiration from the words and rhythms of the great poet while also exemplifying the saxophonist’s own unique approach. “I think Steve did a very good job of capturing the feeling and soul of Maya Angelou’s words,” McBride says. “And it’s such a wonderfully unusual song. Just when you think you know where the chords or the melody are going, they don’t go there. It’s actually a microcosm of Steve’s improvising concept, because he’s always playing these incredibly different ideas. I think that’s why people love Steve Wilson so much – he’s very new school and very old school at the same time.”

Something similar could be said for soul diva Whitney Houston, whose tragic passing last year inspired McBride to pen “New Hope’s Angel.” As he explains, “There have been some untimely deaths in the music world over the last few years, but Houston’s death really shook me up. As far as I’m concerned, she was one of the last great titans, somebody whose voice transcends genre. She had one of those voices where opera singers loved her, jazz singers loved her, pop singers loved her, country singers loved her. They knew that unmistakable sound, and it’s a shame that it had to be extinguished at such a young age.”

The bassist’s other compositions for People Music demonstrate the breadth of his activities. “Fair Hope Theme” is an expansion of McBride’s main theme for the soundtrack of The Contradictions of Fair Hope, a documentary film directed by actress S. Epatha Merkerson. “The Movement Revisited” is drawn from his large-scale suite for choir and jazz ensemble dedicated to four icons of the Civil Rights movement – Rosa Parks, Malcolm X, Muhammad Ali and Martin Luther King, Jr.

Even more important than the ideas behind the compositions is the thrilling music that Inside Straight makes from them. McBride bemoans the “unwritten contention that somehow swinging and imagination are mutually exclusive. I find this band very imaginative and very swinging. I like coming off the stage having broken a sweat. Inside Straight is something of a release for all of the members, because we get to come together and really play some swinging music. It’s become a classic car – a ’69 Lincoln Continental.