Danny and the Juniors 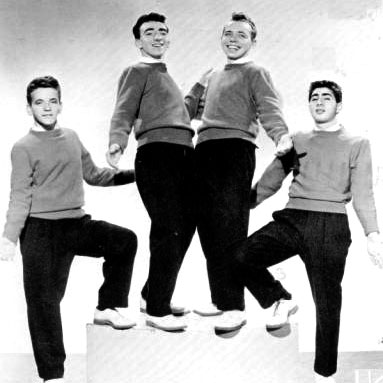 Danny & the Juniors shot straight to the top of the charts in early 1958 with their biggest hit ever, the gold-selling “At the Hop” (penned by the songwriting team of Dave White and John Madara), though they reached the charts again with eight more singles through 1963, notably the Top 40 charters “Rock and Roll Is Here to Stay,” “Dottie,” and “Twistin’ U.S.A.”

Danny Rapp (lead tenor), Frank Maffei (second tenor), Joe Terranova (baritone/bass), and Dave White Tricker (tenor) (aka Dave White) were four Philadelphia high school friends – all were born in 1940 or 1941 – who formed an atypical late-’50s rock & roll dance combo, originally calling themselves the Juvenairs. Rapp – the group’s leader – choreographed their dance steps and invented the routines that they performed during their sets. After playing after-school gigs and local shows as a foursome for a while, they later added saxophonist Lennie Baker to the lineup.

While still in high school in late 1957, they were working a record hop as the intermission entertainment, when a local businessman named John Madara spotted the band. Madara had an interest in rock & roll promotion and introduced them to a local songwriter and vocal coach named Artie Singer, who also ran his own label, Singular Records.

Singer auditioned the band and liked an original song White had written that captured the energetic spirit of rock & roll. It was called “Do the Bop.” However, since the term “bop” was by then already out of fashion, he suggested that the song’s title needed to be changed and helped them shape it into the hit we know today: “At the Hop.” Singer also shortened the name of the group from the Juvenairs to the Juniors and had them cut a demo of “At the Hop” that he took around to play for local DJs. Working with producer Leon Huff, it took 13 takes in Reco-Art Studios in Philadelphia before Singer felt he had the goods from the group.

Singer played the song for Dick Clark, whose popular music show American Bandstand was broadcast live from their hometown of Philadelphia. Clark didn’t have any immediate openings on the show, but as luck would have it, Little Anthony and the Imperials canceled an appearance soon thereafter and Clark asked Danny & the Juniors to fill in as replacements. “At the Hop” proved to be an immediate success. Singular quickly issued the song as the group’s first single and it became a regional hit, selling 7,000 copies in one week in Philadelphia alone. Financially strapped, Singular Records later leased the record for 5,000 dollars to ABC Paramount. “At the Hop” proceeded to climb up the charts in December of 1957, reaching number one, where it remained for seven weeks.

Danny & the Juniors soon followed up with “Rock and Roll Is Here to Stay,” another White-penned rocker, which also made the Top 20. The group toured with several of Alan Freed’s traveling rock & roll shows and put two more songs into the Top 40. In the early ’60s the group switched over to the Swan label and after their last song charted in 1963, Danny & the Juniors eventually parted ways.

Madara ended up running his own record store, located at 60th and Market Streets in Philly. He and White also went on to join the Spokesmen, whose minor hit “The Dawn of Correction” was an answer song to Barry McGuire’s number one charter, “Eve of Destruction.” White also made a solo album for Bell Records, which was released in 1971 under the name David White Tricker. Lead vocalist Danny Rapp committed suicide in 1983. Saxophonist Lennie Baker went on to be a founding member of nostalgia act Sha-Na-Na). Joe Terry, Frank Maffei, and new member Bobby Love continue to rock and roll across the country, thrilling new audiences with old favorites.