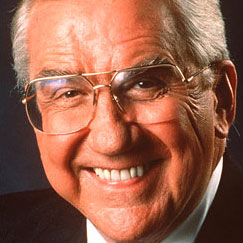 Ed McMahon was born March 6, 1923 in Detroit, Michigan and raised in Lowell, Massachusetts. With one of the most recognized faces in television, McMahon has served as Johnny Carson’s sidekick on “The Tonight Show” since October, 1962. He began his association with Carson on the TV series “Who Do You Trust?.” McMahon has also served as co-host with Dick Clarke on NBC’s “TV’s Bloopers and Practical Jokes.” His popular syndicated series, “Star Search,” begins its seventh season this fall. McMahon is a well-known commercial spokesman, has a nightclub act, makes films, hosts TV specials, was nominated for a GRAMMY Award in 1981, and wins much praise for his charity work.

His first professional stint as an announcer, at age 15, was on the sound truck of a carnival, ballyhooing the midway attractions around the state of Massachusetts. He got his first broadcasting job at WLLH radio in Lowell, Mass., and began his career in TV in Philadelphia; hosting, writing, and producing no less than 13 different TV shows. Besides being a spokesman for several major corporations including Anheuser-Busch and American Family Publishers, Ed McMahon has been co-hosting the Jerry Lewis Muscular Dystrophy Telethon for over 15 years.