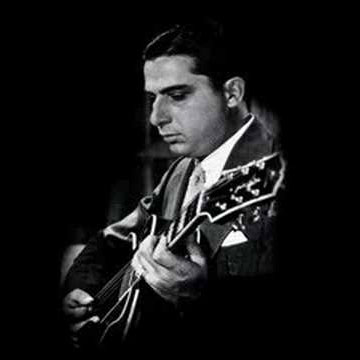 The first jazz guitar virtuoso, Eddie Lang, born Salvator Massaro, was everywhere in the late ’20s; all of his fellow musicians knew that he was the best. A boyhood friend of Joe Venuti, Lang took violin lessons for 11 years but switched to guitar before he turned professional. In 1924 he debuted with the Mound City Blue Blowers and was soon in great demand for recording dates, both in the jazz world and in commercial settings.

Lang’s sophisticated chord patterns made him a superior accompanist who uplifted everyone else’s music, and Lang was also a fine single-note soloist. He often teamed up with violinist Venuti (including some classic duets) and played with Red Nichols’s Five Pennies, Frankie Trumbauer and Bix Beiderbecke (most memorably on “Singing the Blues”), the orchestras of Roger Wolfe Kahn, Jean Goldkette and Paul Whiteman (appearing on one short number with Venuti in Whiteman’s 1930 film The King of Jazz) and anyone else who could hire him. A measure of Lang’s versatility and talents is that he mostly played the chordal parts on a series of duets with Lonnie Johnson (during which he used the pseudonym Blind Willie Dunn) yet on his two duets with Carl Kress (whose chord voicings were an advancement on Lang’s), he played the single-note leads.

Eddie Lang, who led some dates of his own during 1927-29, worked regularly with Bing Crosby during the early ’30s in addition to recording many sessions with Venuti. Tragically his premature death was caused by a botched operation on a tonsillectomy.