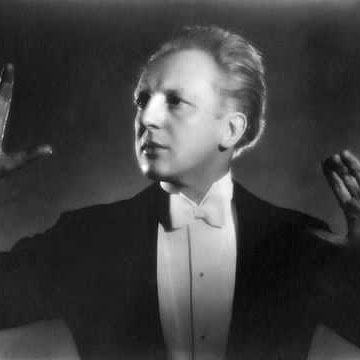 Leopold Anthony Stokowski, one of the true conducting luminaries of the twentieth century, was born in London on 18 April 1882. His father was Polish, his mother Irish, but he was raised as an Englishman. His famous, vaguely foreign, accent somehow appeared later in his life. (It is widely believed this was an affectation, as was his name, adopted in favor of the less exotic-sounding “Leo Stokes.”) The young Stokowski was a precocious musician, and as a child learned to play the violin, piano, and organ with apparently little effort. At the age of thirteen, he became the youngest person to have been admitted to the Royal College of Music.

By eighteen, Stokowski had been appointed organist and choirmaster at St. James’, Piccadilly. He attended Queen’s College, Oxford, receiving a Bachelor of Music degree in 1903. He moved to the United States in 1905, but returned to Europe each summer for further musical studies in Berlin, Munich, and Paris. When a conductor fell ill in Paris in 1908, he made his debut as an emergency substitute. The impression he made led to a position with the Cincinnati Symphony Orchestra in which he quickly achieved notable success. However, a more tempting prospect faced him when he was asked to take over the Philadelphia Orchestra in 1912. It was during his long and fruitful association with this ensemble that Stokowski established himself as one of the leading musicians of his day.

Stokowski gave the orchestra an entirely new sound, popularly known as the “Philadelphia Sound” or the “Stokowski Sound.” Its foundation was a luxuriant, sonorous tone and an exacting attention to color. He pioneered the use of “free” bowing, which produced a rich, homogenized string tone. A relentless innovator, Stokowski experimented with orchestral seating, famously lining up the string basses across the rear of the stage and, in an early instance, massing all the violins on the left side of the orchestra and the cellos on the right. He also had spotlights directed on his hands and his impressively prominent hair to enhance his dramatic, theatrical aura. One of the first modern conductors to give up the use of the baton, Stokowski employed graceful, almost hypnotic, hand gestures to work his magic.

Indeed, Stokowski was the first conductor to become a true superstar. He was regarded as something of a matinee idol, an image aided by his appearances in such films as the Deanna Durbin spectacle One Hundred Men and a Girl (1937) and, most famously, as the flesh-and-blood leader of the Philadelphia Orchestra in Walt Disney’s animated classic Fantasia (1940). In one memorable instance, he appears to be talking to the cartoon figure of Mickey Mouse, the “star” of a sequence featuring Dukas’ The Sorcerer’s Apprentice. In a clever parody, when the slumbering apprentice dreams of himself directing the forces of Nature with the masterful sweep of his hands, Disney artists copied Stokowski’s own conducting gestures.

Following his 23 year tenure in Philadelphia, Stokowski directed several other ensembles, including the All-American Youth Orchestra (which he founded), the NBC Symphony Orchestra and the New York Philharmonic (both as co-conductor), the Houston Symphony Orchestra (1955-60), and the American Symphony Orchestra, which he organized in 1962. He continued to make concert appearances and studio recordings of both standard works and unusual repertoire (including the first performance and recording of Charles Ives’ decades-old Symphony No. 4) well into his nineties. He made his last public appearance as conductor in Venice in 1975, remaining active in the recording studio through 1977.