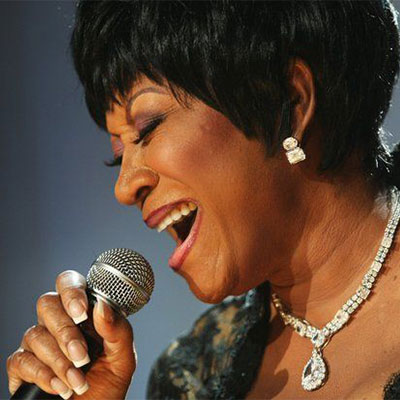 Soul diva Patti LaBelle enjoyed one of the longest-lived careers in contemporary music, notching hits in a variety of sounds ranging from girl group pop to space-age funk to lush ballads. Born Patricia Louise Holt in Philadelphia on May 24, 1944, she grew up singing in a local Baptist choir, and in 1960 teamed with friend Cindy Birdsong to form a group called the Ordettes. A year later, following the additions of vocalists Nona Hendryx and Sarah Dash, the group was rechristened the Blue Belles; with producer Bobby Martin at helm, they scored a Top 20 pop and R&B hit in 1962 with the single “I Sold My Heart to the Junkman,” subsequently hitting the charts in 1964 with renditions of “Danny Boy” and “You’ll Never Walk Alone.”

In 1965, the quartet – now known as Patti LaBelle and the Blue Belles – signed to Atlantic, where they earned a minor hit with their version of the standard “Somewhere Over the Rainbow.” The group’s Atlantic tenure was largely disappointing, however, and in 1967 Birdsong replaced Florence Ballard in the Supremes. The remaining trio toured the so-called “chitlin circuit” for the remainder of the decade before signing on with British manager Vicki Wickham in 1970; Wickham renamed the group simply Labelle and pushed their music in a more funky, rock-oriented direction, and in the wake of their self-titled 1971 Warner Bros. debut they even toured with the Who. The trio also collaborated with Laura Nyro on her superb R&B-influenced album Gonna Take a Miracle.

By 1973, Labelle had gone glam, taking the stage in wildly theatrical, futuristic costumes; a year later they became the first African-American act ever to appear at New York’s Metropolitan Opera House, a landmark performance which also introduced their lone chart-topping single, the Allen Toussaint-produced classic “Lady Marmalade.” However, after two more albums – 1975’s Phoenix and the following year’s Chameleon – Labelle disbanded, and its namesake mounted a solo career, issuing her eponymous debut in 1977. In addition to subsequent releases including 1979’s It’s Alright with Me and 1980’s Released, LaBelle also turned to acting, co-starring in a 1982 Broadway revival of Your Arms to Short to Box with God.

Upon signing with the Philadelphia International label, LaBelle scored a number one R&B hit with “If You Only Knew,” from 1983’s I’m in Love Again. Two years later, she reached the pop Top 20 with her Beverly Hills Cop soundtrack contribution “New Attitude.” Her subsequent MCA debut, 1986’s The Winner in You, went platinum on the strength of the Burt Bacharach-penned “On My Own,” a duet with Michael McDonald, while the follow-up, 1989’s Be Yourself, featured a pair of cuts written by Prince. 1991’s Burnin’ earned a Grammy for Best Female R&B Performance. In 1995 LaBelle published her autobiography Don’t Block the Blessings: Revelations of a Lifetime. Live! One Night Only was recorded in 1998 at the Hammerstein Ballroom in New York City on the heels of a record-breaking two-week concert run on Broadway, and in 2000 LaBelle put out When a Woman Loves.