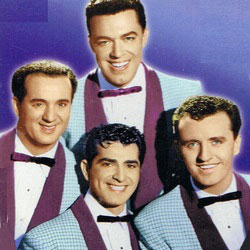 One of the most successful pre-rock vocal groups, the Four Aces did well during the early ’50s with a narrow range of pop material but burned out before decade’s end. Founded by Navy shipmates Al Alberts, (who joined the Navy after graduating from South Philadelphia High and Temple University) and Dave Mahoney, the act added Lou Silvestri and Sol Vaccaro before making a name for themselves around their native Philadelphia. After failing to find a distributor for their debut single “(It’s No) Sin,” Alberts founded his own Victoria label to release the single. It became a big hit in late 1951 and sold a million copies. The Four Aces were signed to Decca before the end of the year, and their debut single for the label, “Tell Me Why,” just barely missed the top of the charts and sold a million copies as well. A few Top Ten hits followed during the early ’50s before the theme to the film Three Coins in the Fountain hit number one in 1954. Another movie theme, “Love Is a Many-Splendored Thing,” spent over a month at the top during 1955.

For several singles during 1955, the group had been billed as the Four Aces Featuring Al Alberts; one year later, he departed for a solo career. Along with the rise of rock & roll, the Four Aces appeared to be doomed. They scraped the charts with a novelty song (“Bahama Mama”) and a rock take-off (“Rock and Roll Rhapsody”), but failed to come through with any hits after 1959. Al Alberts continued to perform into the ’90s, leading a newer edition of the act.